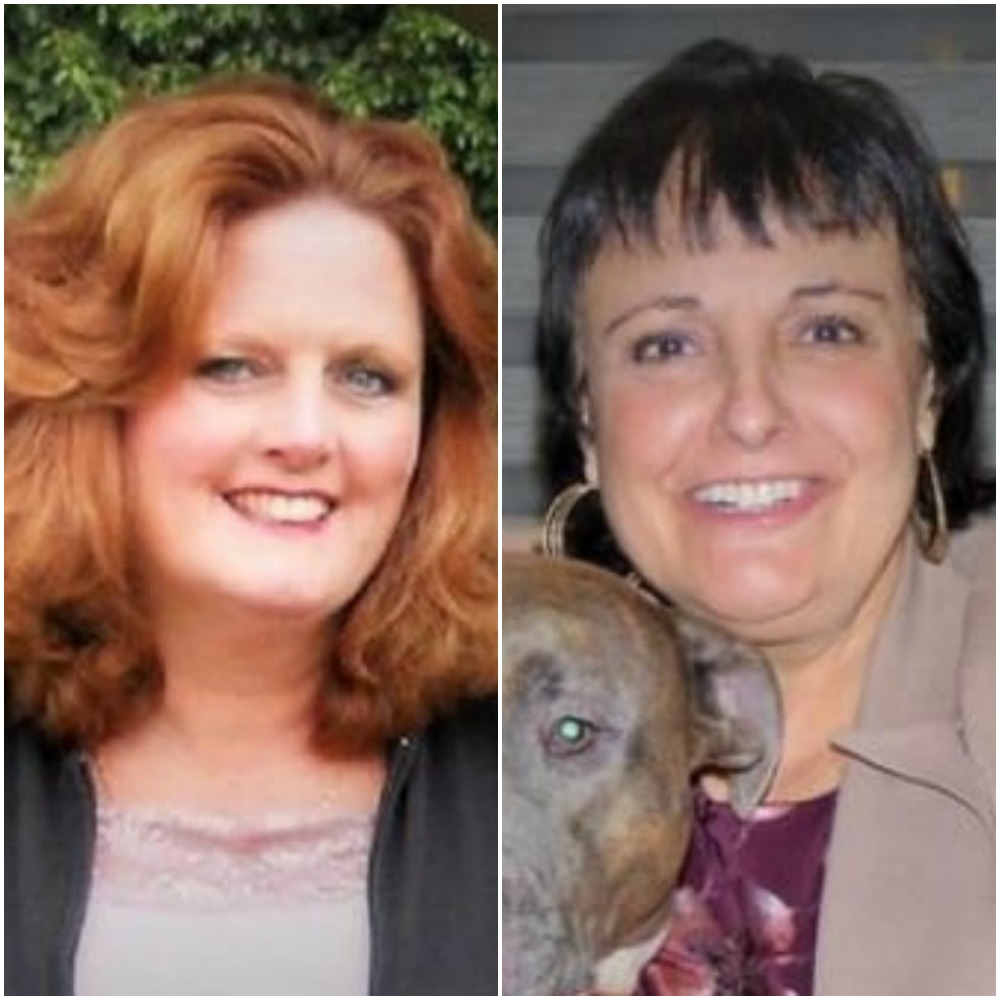 Relationships can be difficult to keep as there are so many more things than just the pair of you to consider. Life has a habit of getting in the way, and it’s how you deal with it as a couple that makes the best relationships stay together. Compromises usually have to be made, but it’s something you don’t mind doing for the person you love. Sure they can be a pain in the neck sometimes, but for the most part, they are special to you, and you don’t know what you’d do without them.

With work getting in the way it can be tricky fitting in time together, but imagine for a second what it’s like living with two relationships. One man was leading a double life as he was dating not one but two women. Although he thought he had been able to keep them separate, a trip to the hospital changed everything for him and the two women he was dating. Here’s what happened when a man’s double life was revealed when his girlfriends met at his hospital bed.

Kathleen Maloney first met Anthony five years ago, and the pair went on a date. He seemed like the perfect gentleman, holding doors open for Kathleen and refusing to allow her to pay for her meal.

Anthony was tall and on the face of it seemed like everything Kathleen was looking for in a man, but he was hiding a secret.

Things continued as they had begun for Kathleen and Anthony, with him continually complimenting her to make her feel special. Kathleen certainly felt very special thanks to Anthony, and it wasn’t long before she fell head over heels in love with the man. After weeks of compliments and loving moments, they couldn’t have been any happier together.

This relationship seemed like the real deal as it’s not often you get struck with Cupid’s arrow so hard you can’t stop thinking about someone. Butterflies were always in Kathleen’s stomach any time she thought of Anthony, and in the beginning, he was the perfect guy, but over time she noticed a change in him.

Giving her a pet name

Things were going so well that Anthony had even given Kathleen her very own pet name. He called her “Bubbles,” and even if it didn’t seem to make much sense, she liked it as it made her feel even more special than she already did. It was affectionate and romantic, just what Kathleen had been needing in her life and Anthony was like a blessing.

Everyone wants to feel special, and Kathleen couldn’t find a flaw in Anthony. Then his behavior began to change, and her lover would go missing for weeks at a time. This was strange to Kathleen as she wanted to spend as much time with Anthony as possible, but he kept disappearing.

Kathleen and Anthony were madly in love and five years flew by quickly. Even though he would continue to disappear without giving a valid reason, Kathleen just accepted that was a part of who he was. Then, after a trip to the doctor, Anthony discovered he was going to need an operation. He informed Kathleen but didn’t want her to worry.

Anthony rang Kathleen to tell her the surgery has been a success, but he was a day early. Although she was surprised he had already been operated on, Kathleen was relieved to hear it went well. Anthony told her he was being quarantined so she couldn’t come and visit, but she went anyway, only to discover another woman by his bedside.

Kathleen wasn’t going to be put off by the fact Anthony was quarantined, she had to see him after his surgery. She drove two hours to the hospital and made her way to her lover’s hospital room. No one at the hospital mentioned anything about quarantine, so Kathleen was free to find him.

When she stumbled upon his room, she saw another woman tending to her lover, who was this person? She introduced herself as Susan, and then alarm bells rang for Kathleen, Susan was the woman Anthony told her was his ex-partner. Kathleen asked to speak to Susan outside, where she learned she and Anthony were still dating and had been for 18 years.

Everything falling into place

Once Kathleen realized Anthony had been seeing another woman everything he had done over the past five years suddenly fell into place. That explained why he kept disappearing for weeks at a time, he wasn’t just going AWOL, he was seeing this other woman.

When Kathleen confronted Anthony about his disappearing acts, he had told her it was because he loved her too much. He was so overcome with emotion that he needed to spend some time apart from her, something she probably regrets believing.

Talking about their future

This was a big blow to Kathleen, who thought she was going to be spending the rest of her life together with Anthony. After dating for two years, the couple had grown very close, and they were talking about their futures together.

They held hands in the sunshine, went for walks in the park, and were just generally infatuated with each other. That was all gone now that Anthony had betrayed that trust. Kathleen had one final warning sign she didn’t figure out when she visited Anthony until it was too late.

Whenever Kathleen made the trip to visit Anthony at the hospital, she probably expected a warm smile from her lover. Instead what she got was a frosty reception where he could barely even look at her.

In hindsight, it made sense as Susan was also in the hospital room at the same time and Anthony must have known the game was up. He barely even acknowledged Kathleen when she showed up, perhaps hoping she would just disappear without discovering the truth.

Although Kathleen didn’t recognize Susan when she entered the room, there was someone else in the room who did look vaguely familiar. To try and get close to Anthony, Kathleen had wanted to meet his family, and he often invited his son to meet them for dinner.

Anthony’s son would always cancel last minute, and here he was sitting in the hospital room with his father. This was the first time Kathleen got to meet Anthony’s son, but it was not in the greatest of circumstances.

When Kathleen entered Anthony’s hospital room, she received a very warm welcome from Susan, who even gave up her seat for her. She introduced herself as Susan, and that’s when Kathleen realized exactly who she was.

As her mind began to race, she asked if she could see Susan outside as she thought they had something to discuss. Anthony finally opened his mouth at this point, but only to say; “Oh brother, here we go. Here comes the pow-wow.” It looked as though Anthony’s cheating ways were now over.

As Kathleen and Susan made their way outside, they didn’t waste any time in discussing Anthony. Kathleen told Susan right away that she was in a relationship with Anthony, and had been for five years.

Kathleen confesses that her heart broke all over again when Susan then asked her a question about her relationship with Anthony. She asked Kathleen if Anthony had ever put her down about her looks, but she had to be honest and tell the also heartbroken Susan that he hadn’t.

Anthony had only ever made Kathleen feel special, which seemingly wasn’t how he had been making Susan feel after all of these years. Then the two women tried to piece the puzzle together.

Ships passing in the night

Kathleen asked how she and Susan had never managed to run into each other. They had both been very close to Anthony, and both had stayed at his house. Kathleen even asked Susan if she noticed a bar of Irish Spring soap she had accidentally left behind at Anthony’s home.

Susan said that not only had she noticed it, she had been using it herself! She didn’t question it and maybe if she had done this secret affair would have been discovered much sooner.

With not much else to say at this point, Kathleen returned to Anthony’s room to gather her things. She told Anthony everything that had been said in the hallway, but he refused to speak to her, accepting that things were over without a word.

Kathleen picked up her things to leave but before she exited Anthony’s son stood up. He asked Kathleen if he could give her a hug as he was very sorry for what his father had done, even though he wasn’t responsible for him.

Kathleen left the hospital in a daze as she drove home. She thought that both she and Susan deserved better, especially as Susan had been so nice about the whole thing. Kathleen was left wondering how she had been so gullible to fall for Anthony’s stories…

And she admitted the revelation had hit her hard. This was going to take some time to get over, but two months after discovering the bad news her phone began to ring. Who was this mysterious caller?

It seemed as though Susan had been thinking about Kathleen and she gave her a call to see how she was doing. This was then the pair realized they were remarkably similar and shared a whole load of interests.

After bonding over the pain of Anthony, they quickly became friends and discovered their mutual love of rescue animals, shabby chic furniture, and Luther Vandross. They both even had a good laugh about the fact that Anthony called them both “Bubbles” as their pet names.

The best of friends

They both lost a lover, but they each gained a new friend as Kathleen and Susan have become best buds. Although she was betrayed by Anthony, in a way, Kathleen feels lucky for having the experience.

She thinks that without that horrible day in the hospital hallways she never would have met Susan and Kathleen believes she gained more than she lost that day. Her friendship with Susan is special and something that won’t be taken away through someone else’s lies.

Although we think of love as a mystical, magical thing, there is a lot of science behind who and ...

The difference between reading and listening to a book

There was a time when you went to the library or a bookstore, picked up whatever book interested ...

The chocolate chip cookie - is there anything better? It’s the kind of food that’s perfect for ...